YORKSHIRE - A COUNTY BUILT ON WOOL 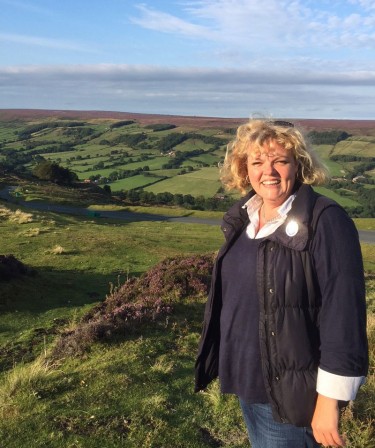 Sheep are not a rare sight in the uplands of Yorkshire. The county has the highest population of sheep in England. But spare a thought next time you see one, for these are the animals that sculpted the character and shape of the landscape, created the historic wealth, bequeathed us beautiful ruins, and launched the great Yorkshire cities. The wool from their backs has created the Yorkshire we know today.

In August, the moorlands of North Yorkshire are a blaze of purple heather.  The sheep, freshly shorn, lazily potter around nibbling on the vegetation. These are the descendants of sheep from generations past, hefted to the place they were born. They keep the scrub from growing out of control, allowing us to take in the huge views, and they trim the heather to keep it flowering abundantly.

Heather in Yorkshire and a Swaledale Sheep

This part of England was decimated following the arrival of William the Conqueror in 1066. William took exception to the lack of respect shown to him and headed north to show the natives who was boss. The Harrying of the North took place in 1068-70. This is the polite phrase for ‘total destruction’. The land was laid to waste, crops were burned, and villages were wiped out, leaving great swathes of land for the taking – or to be gifted to religious communities, which was handy to assuage the sins of genocide. Large areas were given to the devout Cistercian Monks. The Cistercian communities had intended to retreat to the wilderness to live in poverty and hardship, but it all went wrong when they dabbled in sheep farming and found they were remarkably good at it.

Quickly the wooden monasteries were rebuilt in stone – huge edifices tucked into the folds of remote hills. Sheep farming became integral to the Cistercian economy. Rievaulx, Jervaulx, Byland and Fountains Abbeys became wool producing mega corporations. It is estimated that in the 14th century, Fountains Abbey had a flock of 18,000 sheep. They not only sold the wool to the markets in Europe, but were also manufacturers of butter and cheese. The famous Yorkshire delicacy of Wensleydale cheese, recommended to be eaten with a slice of fruitcake, comes from an original Cistercian recipe.

Nearly five centuries later, another monarch made his mark on the county. King Henry VIII created a new religious landscape and ordered the closure of the catholic monasteries that had previously thrived. Henry removed the lead, cash, land and other valuables from the monasteries, then local people made use of a free supply of cut stone leaving the hidden romantic ruins we can enjoy today.

The massive Cistercian farms were dissolved, and the enormous flocks were broken up into smaller units. Subsistence farmers cared for their sheep in the hills. With the sheep in the uplands, the farmers sectioned the rich lowland pastures with dry stone walls enclosing flower filled hay meadows, peppered with hay barns. Still scenes iconic of Yorkshire countryside.

The farmers developed breeds with dense fleeces that coped well with the harsh northern climes.  The Swaledale Sheep, with its black face and curly horns, is the emblem of the Yorkshire Dales National Park.

A Swaledale Sheep in the shade

Wool was still one of the most valuable exports from English shores, but now, instead of being exported through the Cistercian corporation, cottage industries grew, and the wool was taken to market as cloth pieces. This cloth was taken into the burgeoning market towns of West Yorkshire: Halifax, Leeds, and Bradford boomed. Cloth Markets or Piece Halls were established, and merchants travelled from all over Europe attracted by the high quality of the fabric.

The Piece Hall in Halifax

The combination of good grazing lands for the sheep, soft Pennine water to process the wool and river highways to transport the cloth to Europe via the Humber Estuary, meant that once again the riches flowed into Yorkshire. In the 1770’s, one third of all English exports were made up of wool and half of that was traded at the cloth markets of Leeds. As the money flooded in, the wealthy townspeople created vast civic buildings to cater for their cultural enlightenment.

Countryside sheep-related traditions continue today, and the calendar of the upland sheep farmer has changed little. The familiar rhythms of lambing, dipping, shearing, and tupping measure the time passing from year to year.

Each year is interspersed with the country fairs where farmers primp and preen their prize specimens.

The Country Shows, which are held in even the tiniest villages all across Yorkshire, are much more than a fun day out for the community.  Should your sheep come away with a prize, this will add value at the September Auction Mart livestock sales – and these can be quite lucrative if you manage to breed a winner. Prizewinning Texel Tup, Double Diamond, recently sold for over £300,000. It is estimated he will father over a million pounds worth of offspring in his lifetime – so quite the bargain! He will have to work hard though. During the tupping season in October, rams can lose up to 20% of their body weight. It is their job in summer to gorge on the lush Yorkshire grass to build up strength, to create the next generation of lambs to continue to shape this magnificent county.

Next time you cast your eye over the breath-taking Yorkshire vistas, whether it is a sea of purple heather brilliance, the wild-flower filled hay meadowed dales, the Romantic ruins of a gothic Abbey, or the mighty displays of pride filled civic architecture in our towns and cities, think of the sheep and the fleece upon which this county is built.